The new Lego Movie had just been released and Waterstones ran a competition to mark the occasion. The aim was to build a brick version of a favourite moment from a book. So I had to give it a go!

My wife Cathy came up with the idea of The Hound of the Baskervilles, but when she said it, I instantly saw the scene of Sherlock being chased by the hound across the moors. I also had a quick recap of the book via Wikipedia :s

So where to start? It’s defiantly got to be “The Hound”, the beast is the focal point, and it has got to be menacing. The figure probably took the most time to workout and build. It’s kind of a cross between a bulldog and a lion. In the book the Hound glowed green, so hopefully I could produce something along the same lines, but probably not green. We also watched the BBC Sherlock series, purely for research purposes. Loving the show had nothing to do with it.

Next up was the environment. How do you show the bleak vastness of the moors? Do I have even have enough Lego to create an impressive background, in the colours I need? Errrmmm I know, I’ll create it at night. That way I can hide a lot, but also focus the mood and attention by lighting.

I’ve used all sorts for lighting. Candles to give a warm glow, some white led bike lights to give a harsh cool moonlight, and some red bike lights for the Hound to give that rising out of hell look. I also turned on the fairy lights to brighten up the room because I wanted the camera to have a faster shutter speed.

So why did I want a faster shutter speed? To capture the detail in the fog, obviously!

I looked at many ways to create fog, most of them were too expensive for a one off project. A smoke machine would be over kill, I even tried to create fog by boiling glycerin mixed with water, but that didn’t work for me. Another choice would be to use an ultrasonic fogger for a terrarium, but I wasn’t too impressed with the effects. I ended up chatting with a friend from work about the project and hey presto he gave me the solution.

The e-cig works like a smoke machine but in a smaller form. It evaporates a solution usually mixed with nicotine ( in my case there was none! ) and you get lots of foggy vapor. It worked great for the project.

I used a straw to place the fog all around the scene, and took quite a few pictures in hope that one of them would be suitable.

And I got it, just needed a little bit of brightening up and BOOM!

I’m pretty happy with the results 🙂 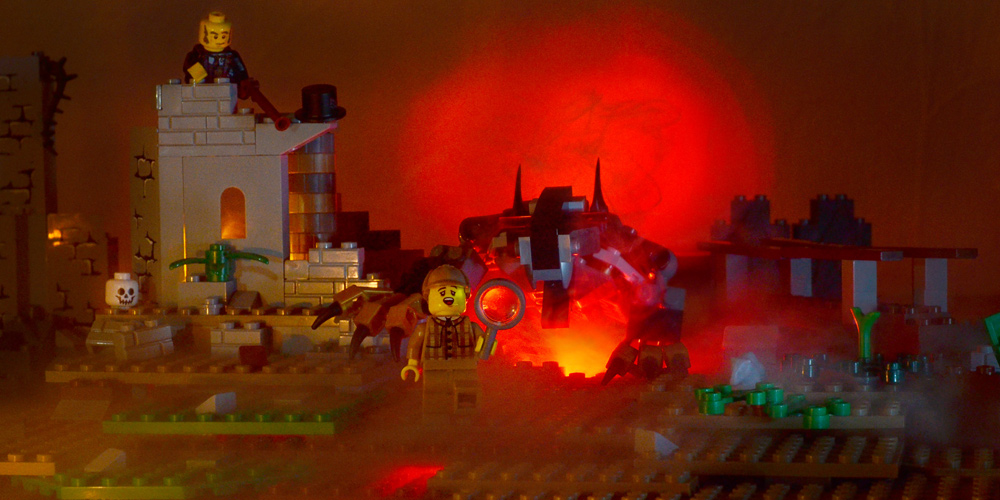